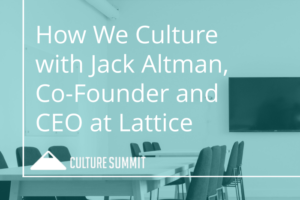 “How We Culture” With Jack Altman, Co-Founder and CEO at Lattice

Written by MC Staff on May 8, 2018. Posted in Company Culture, Interviews.

Are you gearing up for the no-fluff, all-strategy 2018 Culture Summit? Let us help you get in the mood by introducing you to one of year’s speakers, Jack Altman, Co-Founder and CEO at Lattice.

Position: Co-Founder and CEO at Lattice

What problem were you looking to solve when you founded Lattice with your co-founder Eric Koslow?

Eric and I were working together in a fast-growing company called Teespring. I was head of business and corporate development and he was the head of engineering. When we got there we had about 200 employees and we grew to 400 over the course of 2 years and we realized we were feeling a lot of the same problems as the company grew. We felt all the pain of getting more humans to work together harmoniously: communication breakdowns, unclear responsibilities, people not knowing what was expected of them, and a lack of transparency throughout the rest of company. We realized, wow, as you grow, people management becomes this difficult thing.

That was the “problem” we wanted to solve. And what inspired me was seeing how quickly and immediately my happiness and my situation got better with a manager – Robert Chatwani, the former Chief Revenue Officer of Teespring and current Chief Marketing Officer at Atlassian. I realized that building companies is hard, but a great manager has so much power over making employees lives better.

When we left Teespring, we were looking to solve this problem of how companies can do management better.More specifically, how to build a goal-setting tool managers can use to set and align goals throughout company. Over time, we developed a product for performance reviews that really clicked with our clients and that’s become our central offering.

What initially attracted you to the HR space?

For me it was the realization that HR isn’t this boring compliance world. It obviously has that, but software has gotten so good at automating payroll and benefits and core HR systems so that now, instead of spending time on those kinds of problems, you get to work on strategic things: people. Are we motivating and growing the right person for the right role? When I reframed for myself that HR isn’t this cost center, boring function but a function whose job is to make people really successful, I became passionate about it.

How has that attraction evolved throughout your career?

I’ve come to believe that, despite how obviously important the role is to companies and the people that work for them, HR teams are still undervalued by their companies. Over the last 2.5 years at Lattice, I’ve gotten to work closely with extremely talented and caring people. I’ve learned that HR is made up of a great group of humans who choose to spend their career on other humans, and they need more championing in the world and general corporate environments.

If you couldn’t work in the HR space, what would you be doing?

Besides people management, I get a lot of enjoyment out of company building in the general sense: I love the process of creating a new product and talking to customers and building a complicated company.

What are you reading, online or off, that you recommend?

Factfulness: Ten Reasons We’re Wrong About the World–and Why Things Are Better Than You Think by Hans Rosling

Never Split the Difference: Negotiating As If Your Life Depended On It by Chris Voss

Only the Paranoid Survive: How to Exploit the Crisis Points That Challenge Every Company, by Andrew S. Groves

Why We Sleep: Unlocking the Power of Sleep and Dreams by Matthew Walker, PhD.

How do you prefer to read/consume information?

I do succumb to the internet and should spend less time there, but I prefer books over nearly everything else. I have a funny style of reading where I go through a ton of books, but don’t read them cover to cover. I don’t make myself feel guilty about not reading the book front to back and every page. Instead, I allow myself to flip through as I want to go to chapters as I want and mark them up, using the table of contents as place to jump around from. In a lot of cases, depending on the book, this allows me to get through books faster, not because I read less but because I don’t get bored. I’m always excited to read.

What’s your technology of choice?

I use an iPhone and a 15-inch Macbook Pro. For a while, I enjoyed using a Kindle, but I go in waves between a Kindle and regular books. I don’t use a ton of other technology, but I do love my Airpods.

At work, I make a point of not really sitting down in one place too much. I have a desk, but I’m rarely at it. A lot of that is because I’m at meetings or sitting with different teams and spending time with people. Spending time physically next to people and talking to them has been my MO ever since I started managing people – in fact, somebody in the office dubbed my workplace personality animal to be a hummingbird because I’m always floating around. At home, I like to work on my couch with a coffee and a notebook and computer.

How do you define culture? Do you think there is or should be a universal definition?

To me, one of the ways I think about culture as the fundamental way a group of people interact and work with each other. But I don’t believe there’s one understanding of abstract ideas that is true, so I don’t know if there should necessarily be one universal definition. There are multiple lenses we can look at culture through that are reasonable and useful. For example, maybe someone else thinks culture is the degree to which people at a company feel a sense of belonging, while other definitions may be useful tools to encourage a healthy team dynamic.

What are some common misconceptions about culture?

One of the big misconceptions is the belief that you can change people. A lot of companies will spend a lot of time putting certain values in place or encouraging employees to act a certain way. But I think in most cases you’re hiring adults who are fully-formed human beings. Ninety percent of who they are was established before they joined your organization, and you won’t be able to have too much of an impact on that.

That’s why it’s important to invest in culture early, because you mostly can’t change people. Getting culture in place early matters so much because when you’re first building a team it’s about the people, not how you tell the people to act. And after that, the most powerful culture editing tool you have is hiring and firing.

The best thing I heard recently is from an interview we did with Kaitlyn Holloway, VP People at Reddit. She said that when the company wins, that helps build the culture in many ways. I’d never heard this concept expressed this way, and it quickly resonated with me.

At first it seems like it shouldn’t be all about winning, but then I mapped it back to my own experience and saw the truth in it. When things are going well and there’s room for growth and everyone believes the company is great, a lot of good things happen: the bar for talent comes up because you can attract and compensate good people, and that’s empowering for existing employees. It’s the old saying, “Growth cures all problems at a startup,” through the lens of culture.

If you had to pick one culture-enhancing practice or “tactic” most companies could or should implement, what would it be?

In our experience as a relatively small, under 40 person company, offsites have been a surprisingly powerful bonding event for our employees. We’ve done a few at this point, some with teams, some with the whole company, some more substantial than others, but during every offsite people have a great time and get to know each other outside the office in a relaxed environment. When we were a really small team of 6, we went to Nicaragua and stayed at an Airbnb. More recently, we’ve taken a half day in Napa Valley, as well as an international offsite in Mexico.

You can almost see how much faster communication is and how people enjoy doing work together when we give them the space and opportunity to build friendships.

What do you do to discourage negative/harmful culture from emerging?

As far as a tactical approach, I try to establish for myself and other managers and leaders that everyone on the team should be talking to each other first. If someone comes to me and complains about someone else, the first thing I do is ask, “Have you talked to them directly yet?” In most cases, I know if they have or haven’t, but it helps to remind people that the way to resolve problems is by trying to work it out together. It also helps me avoid rewarding or enabling company politics.

If you could impart one universal understanding about company culture to every senior executive in the world, what would it be?

I think the place where senior executives can lose sight of the importance of culture is when it comes in perceived contrast to business goals. If you’re the VP of Sales or Engineering and your job in this quarter or 6-month period is to hit a particular revenue number or ship a new product, it makes sense in the short-term to make cultural sacrifices in the name of those ends without being deliberate and thoughtful about why.

Of course, sometimes there are times as a leader when you do have to make those tradeoffs to reach short goals: you might really need to get this feature released in order to keep the team’s momentum up and to meet that goal you’re willing to make the team burn out more than normal, or allow a rockstar engineer who’s tougher to get along with a little more leeway. Those tradeoffs are made all the time, but you need to be aware of when that balance gets out of whack and make deliberate choices between business goals and culture.

It’s the year 2030, what is the workplace culture dialogue talking about?

One of the bigger trends in the past 15 years has been a shift in power from employers to employees, as it’s easier to get a new job, people stay in roles for a shorter amount of time, and mobile technology allow people to move around more easily. This has all lead to companies trying harder to retain great employees. As a result, we’ve seen workplace conversations become much more employee-centric. Thinking forward, I think this trend will blend with the growth of automation and AI in the workforce so that jobs will become increasingly less monotonous and more creative.