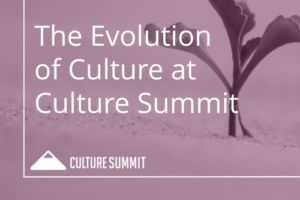 The Evolution of Culture at Culture Summit

Written by MC Staff on May 23, 2018. Posted in Company Culture, Interviews, The Basics.

For the past decade, company culture has grown into a bonafide hot topic in the HR and recruitment world. Now in the 4th year of its running, Culture Summit is in a unique position to see how the industry has grown and changed, and even to reflect some of those changes in how the conference is run, who is attending, and who is speaking.

Today, we caught up with Jully Kim, who has attended every Culture Summit since its inception and Senior Manager, Program Management Office at BigCommerce to hear how the conference – and company culture – has evolved over the past 3 years.

1. Why did you want to attend a conference around the topic of culture, and what jumped out about Culture Summit that made you choose this one?

As a Sr. Manager of PMO, I manage other project and program managers across multiple offices. The culture of the workplace heavily influences my ability and my team’s ability to execute – if the culture is terrible, I’m limited in my role. If it’s awesome, not only can I do my job, but I can do more and grow my role and my people.

Culture is such an important part of the way I think about work that I just can’t separate the two. Of course, there’s the responsibilities and skills I need to get projects over the finish line, but I can’t do those things to the best of my ability in a vacuum at my desk. The nature of work is that I work with people, and people determine the culture I work in, and the culture decides how well I can execute those responsibilities.

I chose Culture Summit because it was the only conference around that actually addressed the topic – the only one! I didn’t know what to expect, but I was hoping to find others I could start a conversation with about how this is an important topic. I knew culture was important and I needed to find others who thought it was important so I could equip myself to be a better culture agent at work… and I did!

2. What’s changed the most about the conference speakers?

The nature of the first two Culture Summit conferences was very much around executives who were embarking on culture initiatives. At the time, those were probably the only people who could speak out about how important culture was – the executives, CEOs, and authors who were starting or leading a new company and rolling out a culture program. It was really valuable insight from trailblazers like Google, Culture Amp, Facebook, and Airbnb who could validate that this is important and something worth pursuing.

Over time, the caliber of the speakers hasn’t changed, but the nature of their jobs and closeness to lower-level employees has bridged the gap. Particularly last year’s conference, there were great keynotes as well as less well-known companies who were doing awesome things in employee mentoring, engineering recruiting, and diversity and inclusion. There was a lot of varied experience that felt more tangible, and I walked away with action instead of admiring someone else’s culture.

As more and more people become interested and aware of the fact that culture is valuable part of how we think about work, the natural next step is to ask, “Well, what can I do about it?” So when we hear from middle managers and directors at that in-between, tactical layer, we get a better picture of the next step we can take when we get back to work. It’s less about hearing how awesome other companies are and more about learning what we can do in our spheres of influence.

3. What’s changed the most about the conference attendees?

Originally I felt like the nature of the people I met were people like me who weren’t sure about culture but wanted to know more – engineering managers, consultants, product marketing, and marketing folks. I hardly met any HR people… and then last year’s conference was almost exclusively HR and recruiting people!

Companies are recognizing that the way we recruit, hire, promote, and live out corporate values is linked to HR and HR is becoming much more influential in determining culture. It’s not about listing the corporate values on your website and hanging posters in the office. It’s about how we experience things like onboarding and offboarding, and how we celebrate or manage performance, and all many of these things come back to HR.

In one way, it’s good that so many HR people are paying attention to this important issue, but I worry that assigning culture as a “task” to a department isn’t a good idea. Once it becomes someone else’s job, it’s not your job anymore. It’s no longer the responsibility of the whole company but rather a program or a thing HR “does.”

4. In general, how have you been able to apply what you’ve learned at Culture Summit?

The thing I came away with is that I need to be a culture champion at work. In the past, I’ve felt like my network has talked about culture but felt more or less powerless to do anything about it. But hearing so many experts talk about the importance of workplace culture and give practical tips gave me a lot more courage to talk about areas I felt weren’t working with our culture and celebrate the ones that were. I felt like, “No, we’re not powerless, and we have a voice to embody change and can push for things we think are valuable rather than just admiring the problem together!”

In fact, every year I feel like there’s some issue I’m addressing or something I’m fighting for that feels hard and Culture Summit ends up being right around the corner right when I need it. It connects me with people who encourage me and keep me focused right when I’m feeling deflated – it’s my yearly recharge of being around other people who get it and come back to work with a sense of the particular action I can take right away.

Most importantly, I feel like Culture Summit provides a vision for what’s needed in the workplace. So often we know something needs to be better, but we don’t know what better is until we see other companies and individuals pushing for that vision. It shows me what’s possible and clarifies what I’m actually pushing towards.

Are you ready for your yearly recharge? Don’t miss the Culture Summit in San Francisco this year!