Your questions and comments are important to us.

Creative cultures have one thing in common, they have a lot of ideas!

The problem is most teams don’t have a finely tuned process in place to share, respond, and test their ideas.

This can lead to disengagement when voices are buried, and creative expression is stifled.

At Culture Summit, Hung and I ran up against the same challenge not too long ago.  Whether it’s enhancing the conference, or engaging the community – we both have lots of ideas. We realized that we approached design and testing differently.

Hung is passionate about Lean Startup, and I love Design Thinking.  While we had different tools and methodologies to work with, we didn’t have a unified approach.

And it created several head-butting and not so fun moments.

We recognized that we each brought a different approach based on our experience and instead of trying to enforce one style over the other, we looked at how we could embrace our uniqueness.

No matter what industry you work in, ideas are delicate.  When an idea is first born, it can be killed easily by the initial response.  Everyone has an idea-response they default to that is often unconscious.   This usually stems from previous experience in our careers.

Do any of these idea-responses sound familiar to you?

“Yes, but we’ve tried that before…”

“That won’t work because…”

“Have you thought about the implications of…”

“Ok, well it would have been good to mention this last week/month/year…”

These type of responses nip ideas in the bud when ideas need help to bloom. Most of the time it’s not even intentional.

Over the last month, we have been testing out a few different approaches to how we manage our ideas and came up with a process we love. We’re now feeling more inspired, engaged, and collaborating more than ever.

Step 1: Recognize you have an idea and ask permission before sharing

Sometimes we get excited about an idea and can’t wait to share it.  It’s natural to say things in passing like:

This kind of organic idea sharing is good, natural, and healthy to let flow, but sometimes, it’s not always the right moment to share an idea.

When a team is deep in implementation and execution, bouncing around ideas might derail productivity because of unintentional context switching.  We’ve found it helpful to do the wildly innovative thing and just ask before sharing. 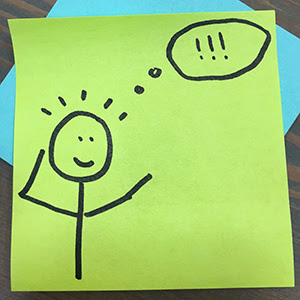 Hung and I were working on conference topics when I had an idea about audience engagement.  I asked him, “Hey, I have an idea on how to create more facilitated networking, is now a good time to share?”

We were currently deep in a task, so the moment wasn’t opportune.  Instead, we put the idea on hold and came back to it later.

Practice tip: If you agree to put the idea on hold, be sure to loop back to it later. Think of it as putting your idea in a greenhouse.  It goes there to incubate, but if you don’t come back to it, it will wither and die.

Brainstorming ideas is a divergent process.  In this phase, your goal is to come up with as many ideas as possible.  There are no bad ideas so let your mind run wild.

After you’ve got an abundance of ideas, then it’s time to converge or come together.  Select a few ideas to consider and test.  The diversity of ideas mixed together is where the magic happens.

Look over the list of ideas you have and use empowering phrases such as:

“What makes you excited about this idea?”

“What would the positive outcomes be?”

“How did you get the idea, where did the inspiration come from?” 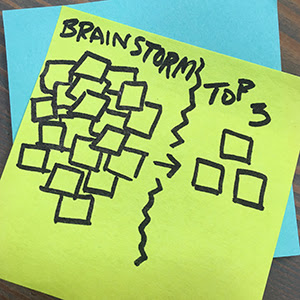 We were brainstorming ideas on how to engage with you, our community.  We created an idea board and challenged each other to add at least 30 ideas (good or bad) over the course of the week.

We then came together in person to sort and select our top two.  We looked over the list and asked each other questions about the ones that caught our attention.  It was easy for us to see where we had alignment and which ideas resonated with us the most.

Step 3. Assess ideas from multiple angles starting with the positive

Equipped with our top two ideas, we had completed the first phase of the brainstorming cycle. Now we needed to vet how to move the idea into implementation.  We used the Disney Method where we used three different perspectives to assess our ideas. 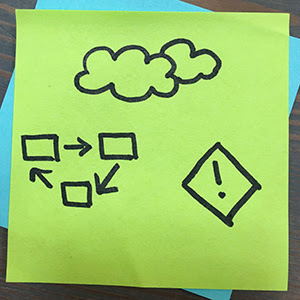 The three perspectives are:

Dreamers: Dream up the best case scenario if this idea is fully realized.  What’s the ‘shoot for the moon’ type of outcome you’d like?

Realizers: How would you bring an idea to life?  Look at how the idea can be put into action. What would be the first step? What are all the pieces that need to be considered?

Critics: Review the plan and search for weaknesses, obstacles, and risks. Discuss the pitfalls and how to address them.  Having pitfalls doesn’t mean you shouldn’t move forward.  Critics seek to improve the plan.

This exercise of the Disney Method helps everyone consider the multiple perspectives that help support the success of an idea.

If an idea has made it this far, it’s time to test and put it in motion.  When we test ideas, we break the plan of action down into the smallest slice possible that allows us to get the most amount of learning.

Hung and I hold each other accountable by asking questions such as,

“Can we make this even smaller?”

“Are we gaining the most amount of learning from this slice?”

If the answer is no, then we make the slice bigger.

You can also create a spectrum, where you look at:

I call this the Goldilocks Rule =) 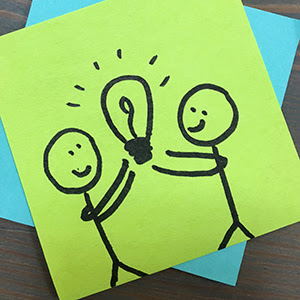 Remember, people in your team will show up with different approaches and experience.  Supporting and building on ideas helps to create psychological safety and trust in teams.

Vanessa Shaw is founder of Human Side of Tech, through which she advises forward thinking thinking executives and HR leaders to operate their companies with a culture-first approach, so that they can turn challenge into opportunity when facing rapid growth, digital disruption and culture change.